(If you want to buy any of these books, see the information at the bottom of this section)

Khrushchev: The Man and His Era, by William Taubman 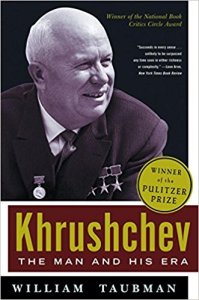 Winner of both the Pulitzer Prize and the National Book Critics Circle Award, this is the definitive biography of the mercurial Soviet leader who succeeded and denounced Stalin. Nikita Khrushchev was one of the most complex and important political figures of the twentieth century. Ruler of the Soviet Union during the first decade after Stalin’s death, Khrushchev left a contradictory stamp on his country and on the world. His life and career mirror the Soviet experience: revolution, civil war, famine, collectivization, industrialization, terror, world war, cold war, Stalinism, post-Stalinism. Complicit in terrible Stalinist crimes, Khrushchev nevertheless retained his humanity: his daring attempt to reform communism prepared the ground for its eventual collapse; and his awkward efforts to ease the cold war triggered its most dangerous crises.

This is the first comprehensive biography of Khrushchev and the first of any Soviet leader to reflect the full range of sources that have become available since the USSR collapsed. Combining a page-turning historical narrative with penetrating political and psychological analysis, this book brims with the life and excitement of a man whose story personified his era.

The book is still in print in hardback, paperback and e-editions; a new hardback edition will be issued by the book’s British publisher in October 2017.

Now out of print, but well worth hunting for in secondhand copies, for those curious about the early period of Gorbachev’s reforms as viewed by two experts with plenty of firsthand observation. As R.H. Johnston said in a review in Library Journal, “The authors see a revolution in the making as momentous as that of 1917. The intoxicating excitement of their meetings with Moscow intellectuals and others leaps off the page.”

The View from Lenin Hills: An American Student’s Report on Soviet Youth in Ferment, by William Taubman

Chronicles the period at the beginning of the author’s academic career, shortly after Khrushchev’s removal from office. WorldCat called the book “an eye-opening report on Russian youth today, a vital and restless new generation that openly criticizes Communist leaders and propaganda, and is disenchanted with the twisting and turning of the Party line. While the youth dares to speak out, much remains the same in Russia, as Mr. Taubman discovered when he was trailed by the secret police and denied access to certain essential research facilities. How he and his young Soviet friends coped with these harassments enlivens this account with humor, as well as with suspense.”

To buy any of these books:

You might try the following booksellers. For the titles now out of print, booksellers with fairly good supplies of secondhand titles are marked with *, but other independent bookstores may have the titles too.

Books take years to research and write, but come back here from time to time for links to shorter pieces Bill Taubman has penned about Gorbachev, Khrushchev, and many matters related to Russia or the USSR.

Meanwhile, if you are hungry for more books on Russia, Bill has provided his own recommendations on five excellent books on Russian and Soviet history in the Summer 2017 issue of Amherst College’s College Row.